When Tribes: Ascend first launched three years ago, it was met with a massive amount of hype as one of the best fast-paced FPS’s available. The game’s name was shamelessly shared far and wide across the internet. However up until a few days ago, the game’s been pretty much dead population-wise. The most people playing at any given time would usually average one hundred players. Sadly this is the fate the game faced when the it had failed to live up to the hype bestowed by fans of the long running Tribes series. The developer, HiRez, decided to shut down updating of the game but continue to keep it running and fix it if it ever goes down. Beyond that however, the game would not receive any new content.

HiRez recently decided however that it may be worth taking a second look at Tribes and releasing an update. This sent some minor shock-waves throughout the gaming community that there may still be hope. It mainly focused on well… everything. The entire class system and many of the mechanics were fully overhauled. This was all done to appease the fans and bring back mechanics that they all loved and knew.

Today, as a veteran Tribes: Ascend player, I would like to re-review the game in its current state and offer a new perspective on it. I have never played any Tribes games before this one, so I am fairly unbiased in terms of nostalgia and can review the game purely on its merits (and shortcomings). Perhaps by the end of it, you too will be convinced of its value and may very well opt-in to download and give it a try.

This FPS has one very unique mechanic that is not found prominently anywhere else in gaming’s current lineup: skiing. No, your character does not literally go skiing down snow-covered mountains. Rather, you as the player hold space whenever directly on a surface to remove all friction and therefore ‘ski’. This works through the use of some anti-gravity, rocket things. I’m not entirely sure about the lore of the technology behind this but you can visually see what it looks like in-game if you switch to third person view. What this mechanic allows you to do essentially is traverse maps quickly and bring a new element of movement into the game to affect combat and travel in every way possible. 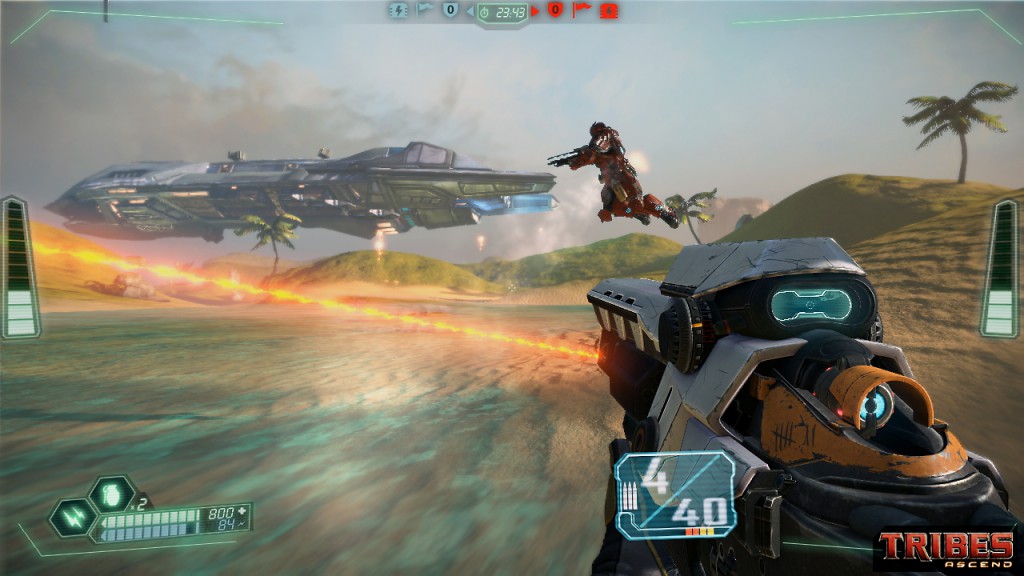 However, this friction-less mechanic is not alone. It is coupled with a jet-pack that is strapped to the back of every player. With this, you can propel yourself higher and higher until your energy runs out. In order to recharge, simply wait 5-10 seconds and let the meter fill up again. This feature coupled with skiing allows for unparalleled movement in terms of combat and speed. Players who wish to capture the flag can invent routes that use the maps’ various landscape features to increase speed to ludicrous levels and return the flag in ways that make it nearly impossible to stop the enemy team from catching up before he captures it.

These two mechanics come together to create an unparalleled motion system that cleverly utilizes the entirety of the maps as well as introducing the Z-axis element where in current games we have only experienced the XY-axis for the most part.

Alongside movement, there comes the interesting combat system that fits its name well. Battle is done with automatic rifles, but primarily there are things called spinfusors and other explosive weaponry that take center-stage. Apparently, each of the two tribes will duke it out using weapons that fire spinning discs of energized doom toward the enemy. This does splash damage alongside direct damage if you can hit the person with all his flying and skiing.

Do not be off-put by the seeming complexity of this game. It really isn’t that tricky to understand, the real key is mastering it. In general, your job is not to aim at where the enemy currently is, but rather you must aim at where he will be. Since everyone (including yourself) is always moving, you must always anticipate the enemy’s next move so you can fire ahead of time so that the player will move right into your fired projectile.

Simple mechanics, not so simple learning curve. It makes for an easily fascinating game but a not so enjoyable experience when getting wrecked by veterans. The best advice I can give is to stick at it. Everyone was a noob once, I am no exception. 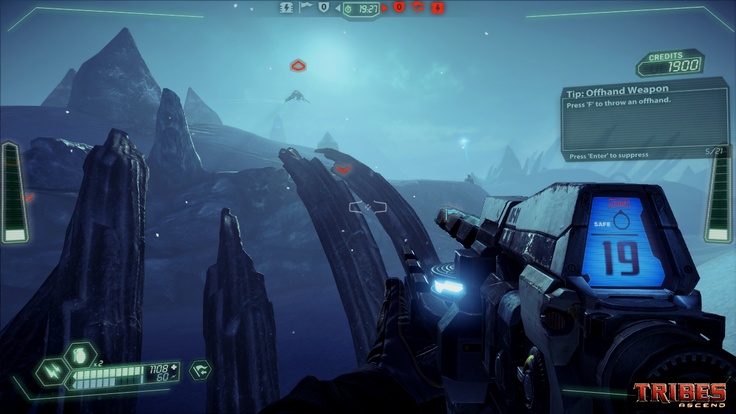 Tribes also features vehicles. You can spawn from the following: Grav Cycle (a hoverbike), Shrike (a flying vehicle), and a Beowulf (hovertank). Each of these vehicles have their own ups and downs to their uses. The Grav Cycle was buffed in the update to where it is now faster than its flying counterpart (the Shrike) when you boost by holding down the right mouse button.

The Grav Cycle can carry up to two passengers so if your friend has the flag for example, you can drive him around the map as you try to dodge the enemy team’s retrievers. The Shrike is pretty straight forward where you will simply fly and use the guns on the Shrike to assault positions from far up. However you must be careful and perform maneuvers to perhaps dodge missile and weapons fire. No one likes a mosquito, they will likely try their best to shoot you out of the sky. As for the Beowulf, it’s essentially a hovertank. It can crew two people. One for the machine gun and one for the big gun.

As for shortcomings, with the new overhaul it is significantly harder to pull off flag capturing (the focal point of the game) and easier for chasers to catch you before you capture the flag. This messed up veteran players but hopefully as a new player you won’t have to relearn anything, rather just learn the game from the ground up never having experienced the game pre-patch.

Let’s not forget the voice chat system that is built in. It has become the very soul of the Tribes series as it allows us to communicate on whole new level for example V > F > G means “Give me the flag”. Sadly it does not allow for the player to use his own voice but through a handful of keystrokes you can send a message in the heat of battle. This voice chat system helped further popularize the word ‘Shazbot’ as a curse word for when things go wrong. You can use this command by typing V > G > S.

After the recent update, the linear class system is completely done away with and now you are given three class choices: light, medium, and heavy. With these, you can select up to three weapons that are available to the class you have chosen. You may also select what skin you want for the class so that you can pick how you want it to look. There are many combinations for even the most specialized of players so you can always get a good fit on your play-style.

One of the automatic weapons

I do like this system which allows for the versatility of having a retriever and a sniper in one, or perhaps an explosive weapons class mixed with an automatic rifle which allows for a great position assaulting combination. The options are endless.

You may also choose your soldier’s skin which can be purchased from the cash shop. But rest assured, the cash shop does not sell any P2W items. Everything sold is strictly cosmetic.

T:A was made primarily during 2010/2011 with release being at the end of 2011. The most ideal engine available at that time was Unreal Engine 3. It boasted the best graphics, usability, and developer-friendliness around at the time and it definitely lived up to its name. This resulted in the game you see today which quite frankly still looks amazing.

The colors are vivid and many of the maps feel alive. When you hop into any map such as Katabatic or Tartarus (this one especially), you will get the sensation that you truly are in an alien world. All of Tribes’ weapons are extremely detailed, you can see the screen that shows the ammo counter has a refresh rate as well as some of them having cracks and dents to show their wear. It is clear that HiRez put a lot of their heart and soul into this game’s design when they conceived it.

A shrike in the map Dry Dock

Performance-wise, Unreal Engine 3 has always utilized the GPU but made good work of the CPU as well which is something many engines do not do. This extra utilization of the CPU helps the engine give all of the features that it does. I have a quad-core AMD Phenom II chip so I do just fine running at high settings with 1080p. However, I cannot run it at ‘Very High’ because my CPU lacks the extra juice. My GPU is fully safe however as it is an AMD Radeon HD 5970 2GB so I can confirm that the CPU is the only bottleneck here if you have an older PC.

If you intend to play this game, make sure your CPU can handle it. However, just play at the lowest settings if you have to, even if you have to miss out on the graphics fidelity. The game is a bunch of fun and you can always play at higher settings when you manage to upgrade.

Tribes: Ascend is a great game for all players, old and new. I recommend not trying to go on a nostalgia trip but rather appreciate the game for what it is and how it can be improved. This is the best way to enjoy it. The graphics fidelity is amazing, the worlds feel lively. The map design is top notch in terms of how it was made for the introduction of skiing with flight.

In the end, I must recommend this to almost any gamer that wants a slight challenge. This game can offer so much more than one would expect with so many different ways to play. It’s not perfect, but it’s most certainly not bad. Give it a shot, I dare you.